As a result of the continuous displacement movement in Southern Syria due to the battles and the shelling, the number of the displaced families have moved to farmlands and collective centers where they found safety. These families have faced a lot of problems such as Lack of Hygiene and lack of education. Auranitis have assessed these collective centers and informal camps and prioritize the work in coordination with the local community.

Based on these assessments, Auranitis have implemented a winterization project funded by OCHA.

The project aims to fill the gaps in the winterization response in southern Syria, During the difficult conditions in winter by providing each school with a “sealing-off” kit, targeting the school premises, and provide winter clothes kits to the students of these schools.

More specifically, through the project, we have worked on preserving the heat inside schools through “sealing-off”: covering the windows with plastic sheeting and wood.

Auranitis team also spread awareness on preserving heat in winter through sessions to students and teachers. Our team also distributed a jacket and a training suit made of thick fabric to each student of the targeted schools, these winter clothes ware produced locally in Southern Syria in 3 different workshops where 41 workers (25 of them were women) have been benefited through cash for work.

the total number of beneficiaries of this project was 7616 students (4570 boys and 3046 girls) in 26 different locations, these locations were selected based on the NFI/Shelter and education sector’s needs. 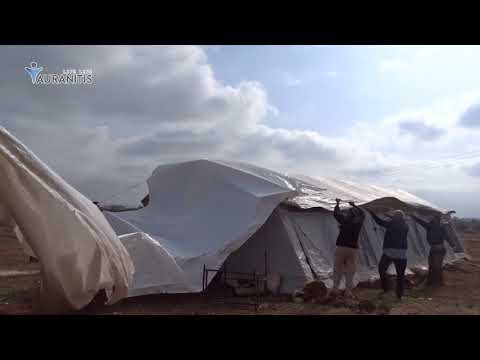